Joined 11 mo ago
·
36 Posts
This is one of very few posts that involves paddle installation on the Ghibli, and as others have noted I could find no other source of information or video anywhere that specifically addresses the Ghibli. Thanks to Ian Tang, mpra1999, Bianco and others for their instructions on the topic. While the provided info is good, without pictures it was very challenging to complete with any confidence. PLUS, I found a way to do the install without removing the clock spring assembly or the entire steering column cover. Hope the following helps (2015 MY).


Air bag and wheel removal are quick and easy, as described elsewhere; two bolts (4mm) on either side of wheel behind plastic caps and air bag is off. For air bag connectors, lift each orange plastic tab up first (flat head screw driver), and connectors remove easily. Disconnect white horn lead. 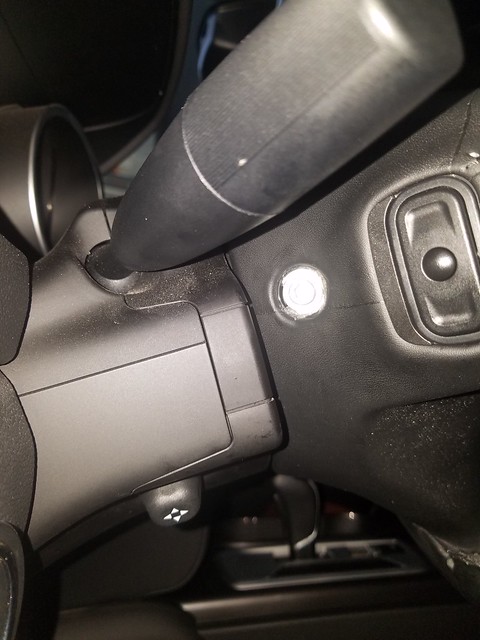 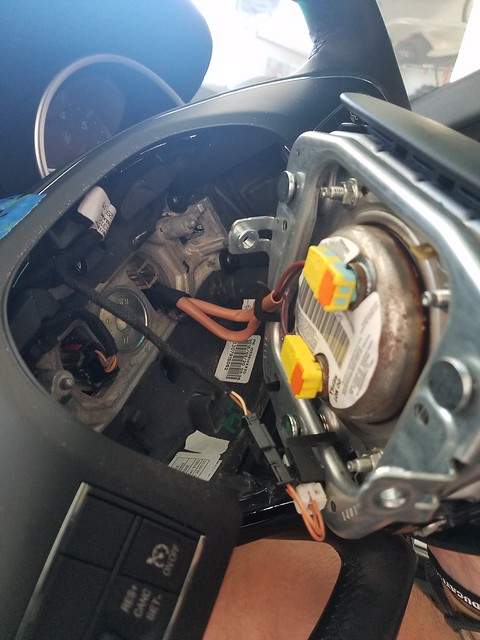 I removed and replaced my wheel twice during this process and did not have to mark its orientation, and since I did not remove or spin the clock spring, it all went back on perfectly lined up and working properly. Steering wheel is held by a bolt which takes a 10mm socket (not shown). Mine required a fair amount of torque but it released without too much trouble. Unclip black connector, slide bag wires through and set wheel aside.
Next is the top cover surround – it is held with four plastic hook-shaped clips which take careful fiddling to remove, but it will come off (plastic auto trim tool helps). 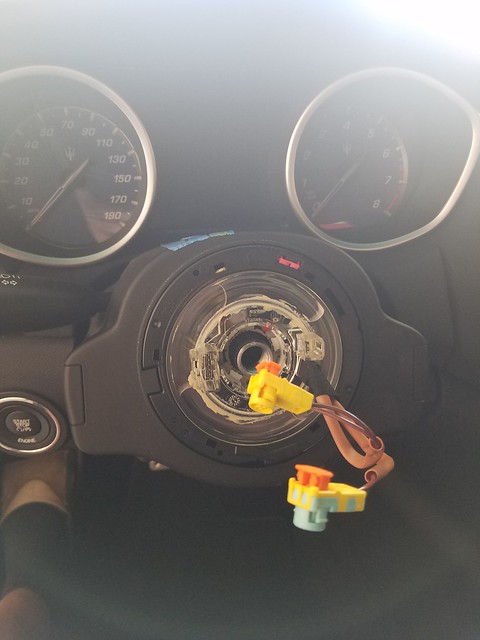 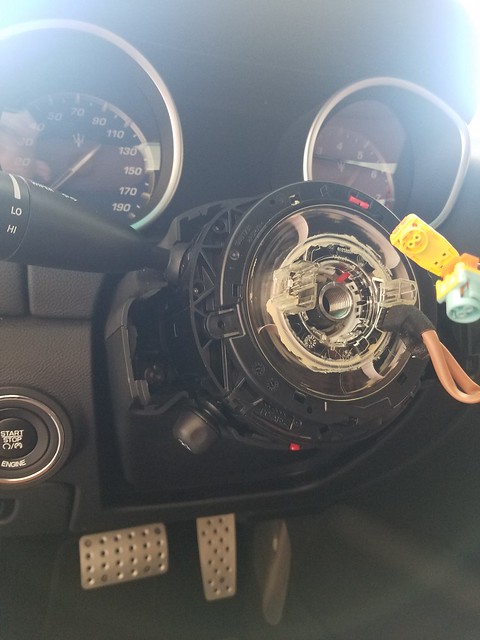 The lower column cover is held on by the same plastic clips, three on each side. A flat head screwdriver may also help carefully disconnect the hooks, though watch for slipping/scratch damage.
The harness connector for the paddles was taped tightly with electrical tape to the side of another connector; separate them. 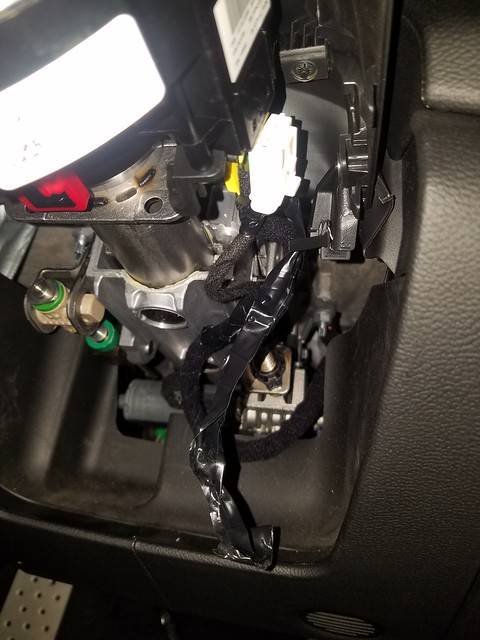 From here looking up from underneath you can see the welded steel base that the paddle bolts to; all that is in the way is the large yellow harness connector on the lower right. 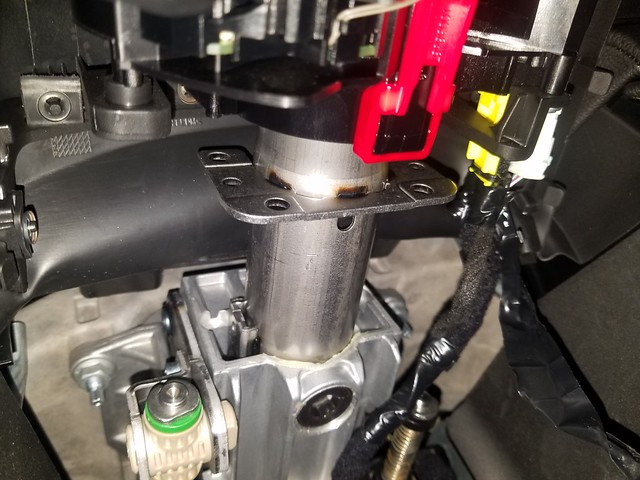 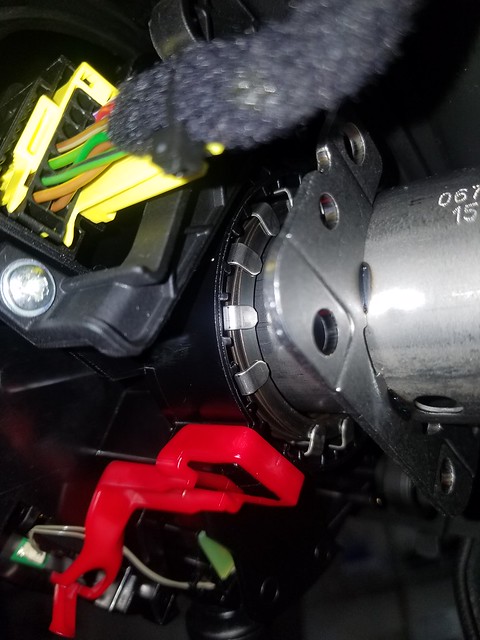 Pinch the back of this connector and it should slip out fairly easily. Slide the paddle bracket up under the column and rest it on top of the base; from behind, screw in and tighten the four mounting bolts (you’ll have to buy these – 6mm, about 12mm long worked for me). Clip in the paddle harness connector; clip in the large yellow harness connector. And then reverse the disassembly process.
I did not purchase a new to column cover – just using a Dremel tool cut the pre-marked rectangular section from the stock cover. Looks great, fits around paddle as expected. 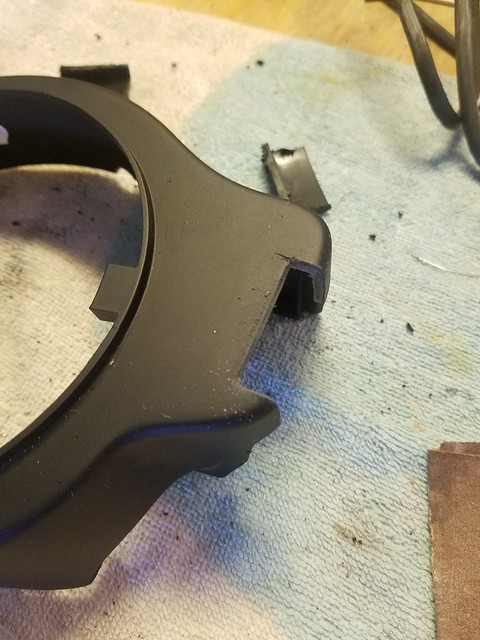 I did not purchase an angled/longer signal lever assembly. I found that there was lots of clearance above the top of the column cover to shim the paddle arms up/forward slightly toward the driver and away from the signal lever. Three small washers combined with slightly longer bolts (4mm x 10mm) snugged the paddles down perfectly (2.5mm hex). No touching, and room for fingers around the steering wheel. 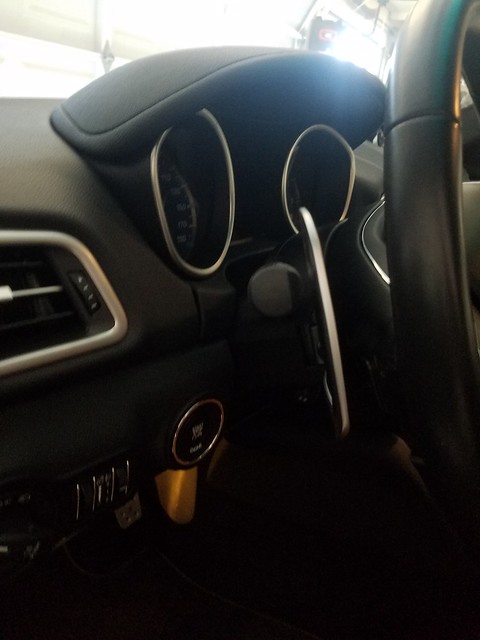 I got no codes other than from disconnecting the air bag (red air bag light indicates service required – will eventually clear that code). Horn, radio, etc work as usual. Paddles fully function and shift gears whether in Drive mode or in Manual mode, and without any dealer intervention. When shifting while in Drive mode, a long pull on the + paddle returns the vehicle to Drive (it also eventually times out…). No paddle icon on dash, but seriously don’t care as ‘M’ shows up when engaging paddles and you already know when you are using the paddles. Note, when turning the vehicle on for the first time, I found the set wheel position remained at the top (since the harness was disconnected). One press of the seat memory button and all returned to normal. 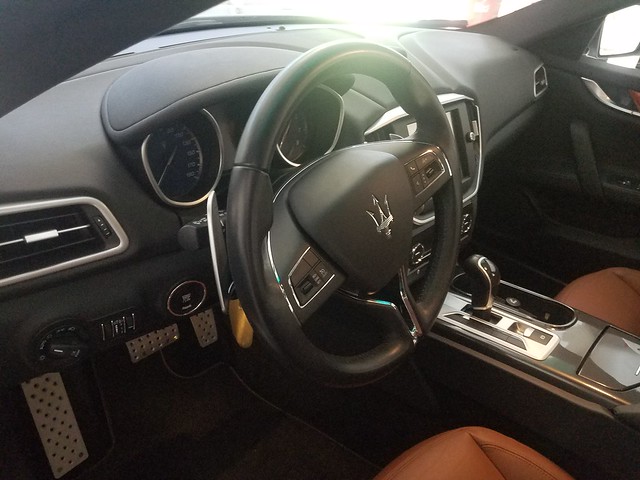 All in I paid $300 for a pair of take-off paddles and a few cents for extra bolts (not counting what clearing the air bag code may entail….). And, once I knew what I was doing, the project took about 2 hours.
► Show Full Signature
Sean
2015 Ghibli 'grigio'

Joined 11 mo ago
·
36 Posts
Hi again. Quick follow up on this post, where it was noted after install that I ended up with an airbag code.
Figuring this was routine for airbag removal, I bought an OBD scanner tool which can clear airbag codes - it showed a short on the "driver front squib 1 control wires shorted together" (code B0001 2B/A). When the code wouldn't clear, I realized it was displaying both a code record and an active code, which led me to research the airbag connectors further and how the shorting bars work. Sure enough, I found that I had not fully seated one of the orange clips (visible in photos 2 and 3 above). The connector was seated, but this clip disengages the shorting bars and it was still about 1.5mm up. It seated with a snap and the airbag code is finally gone.
As another reminder, when the battery is disconnected and reconnected, ensure to run through the key fob lock/unlock procedure before turning on or starting the vehicle. I panicked for a minute when the display locked out and asked for a radio code. Shutting off and doing the key fob routine set everything back to normal without requiring the code.

Ok, after this, a spoiler, pedals, puddle lights and reversing sensors, I'm done modding for a while... Well, until I get a chip.....!
► Show Full Signature
Sean
2015 Ghibli 'grigio'
C

Joined 29 d ago
·
2 Posts
Hi Sean, did you end up having to clear the airbag code or was reseating the plugs enough to clear it?
F

Joined Aug 29, 2015
·
418 Posts
Thanks Sean for this excellent post.
I've learnt something, that pressing on the + for a few seconds reverted back to AUTO.
The thing I need to learn now is how to make the gearbox forget it's learning, and learn again a different driving style.
I'm a sort of Dr Jekhill and Mr Hyde when I drive LOL.....

Christian2015SQ4 said:
Hi Sean, did you end up having to clear the airbag code or was reseating the plugs enough to clear it?
Click to expand...

Hi - sorry for delay in reply; I'd not seen the post earlier.
Yes, the short was simply one I caused by not seating the orange tab all the way. Nothing to reset or clear once I snapped it down fully; all operated normally and no codes.
► Show Full Signature
Sean
2015 Ghibli 'grigio'

Hey - yes, as I understand it that replacement clockspring part comes with a signal lever that is angled away slightly from the wheel and provides more clearance for the paddle on the left. I used my stock setup which has the lever just a few mm from the paddle - this was where the addition of the small washers (shims) came in to angle the paddles at the base away from the lever and provide a little more room. Note, it brings the paddles a few mm closer to the wheel too, but all these months later I'm still happy with my setup as is.
► Show Full Signature
Sean
2015 Ghibli 'grigio'

Fredvr said:
Thanks Sean for this excellent post.
I've learnt something, that pressing on the + for a few seconds reverted back to AUTO.
The thing I need to learn now is how to make the gearbox forget it's learning, and learn again a different driving style.
I'm a sort of Dr Jekhill and Mr Hyde when I drive LOL.....
Click to expand...

Ha! Yes, I noticed my sport mode profile has gotten pretty aggressive. I can identify with the Jekyll/Hyde thing!

Yes I like to downshift too, when preparing to overtake 😀
C

Sean Tompkins said:
Hi - sorry for delay in reply; I'd not seen the post earlier.
Yes, the short was simply one I caused by not seating the orange tab all the way. Nothing to reset or clear once I snapped it down fully; all operated normally and no codes.
Click to expand...

I completed my installation and it is working. I do have a couple of weird quirks that emerged...1. The warning light for potentially icy conditions is on (it's been more than 50 degrees for the last month), and 2. the service automatic high beams warning pops up periodically. I borrowed and ODB2 device and checked for errors and it isn't showing any. Thoughts?
1 - 10 of 10 Posts
Join the discussion
Continue with Facebook
Continue with Google
or sign up with email
Recommended Reading
Read More
Read More
About this Discussion
9 Replies
4 Participants
Last post:
Christian2015SQ4 12 d ago
Maserati Ghibli Forum
A forum community dedicated to Maserati Ghibli owners and enthusiasts. Come join the discussion about performance, troubleshooting, reviews, maintenance, and more!
Full Forum Listing
Explore Our Forums
Maserati Ghibli General Discussion Engine and Technical Discussion Purchasing and Orders Electronics, Audio, and Lighting Wheels, Tires, Brakes, and Suspension
Popular Communities